Two months with the Oura ring

After mentioning that I now track my sleep with the Oura ring I received several emails asking what I thought of it. I’ve been meaning to write up some thoughts about this for a while, so here goes!

Since taking a more active interest in my health, I’ve read plenty about how bad for you a lack of sleep is. For example, from the NHS web site:

Regular poor sleep puts you at risk of serious medical conditions, including obesity, heart disease and diabetes – and it shortens your life expectancy.

I’ve been working my way through that list. Obesity, YEP! Diabetes, YEP! Heart disease… Thankfully no, but there’s no doubt I was heading towards it. I wouldn’t put a lack of sleep at the top of a list of causes for the first two, eating way too much, eating the wrong things, and never exercising took care of them just fine. But now I have those more under control, I figured it was time to work on secondary causes.

I’ve been an early riser for a very long time and usually wake up naturally between 6am and 7am. I’m not usually that late to bed, but between 11pm and 12pm is normal. Given that all the advice says that we need at least 8 hours of sleep, those numbers don’t really add up. How much sleep was I actually getting, and what was the quality of it? I ordered the ring to find out.

So how is it? Basically it’s great! It’s certainly bigger than some regular rings, but it’s not so big that it’s uncomfortable or unsightly. People don’t notice that I’m wearing a gadget on my finger, and when I occasionally take it off to show friends they’re surprised it’s not just a normal ring until they look closely. It’s not ugly either, I actually quite like it. The bumps on the inside of the ring are noticeable while wearing it, but they’re not uncomfortable at all. The only slight annoyance is due to the inside of the ring being plastic which can sometimes cause it to stick slightly to my skin, but it’s not a big deal.

It did take a little while to get used to wearing a ring though. I’ve never worn jewellery regularly before and just like when I first started to wear the watch, my body was acutely aware of it for the first week or so. I was able to forget about it reasonably quickly though.

Battery life is also great. It doesn’t quite have the week long charge claimed by the web site, but it definitely goes 4-5 days before it sends me a notification to charge it. That’s easily good enough.

The app is also pretty good, it’s reliable and it presents the sleep data in a sensible way. I’d love to see a few extra metrics though that don’t just focus on night by night sleep, but on trends and averages. For example, I’d like to know:

I’d also love it if the app could guide me a little more on how my sleep compares to a person who is getting enough. Is it normal to wake up in the night so regularly? I have no idea.

After wearing the ring for 2 months, the main thing I know is that I definitely do not get enough sleep. I get an average of about 6 hours of interrupted sleep each night. I think I’ve only recorded more than 8 hours a few times. That’s not good.

What’s also interesting is my sleep pattern. First of all I’m surprised to see it’s way more predictable than I would have thought. This is last night’s sleep data for me, and it’s a very typical night: 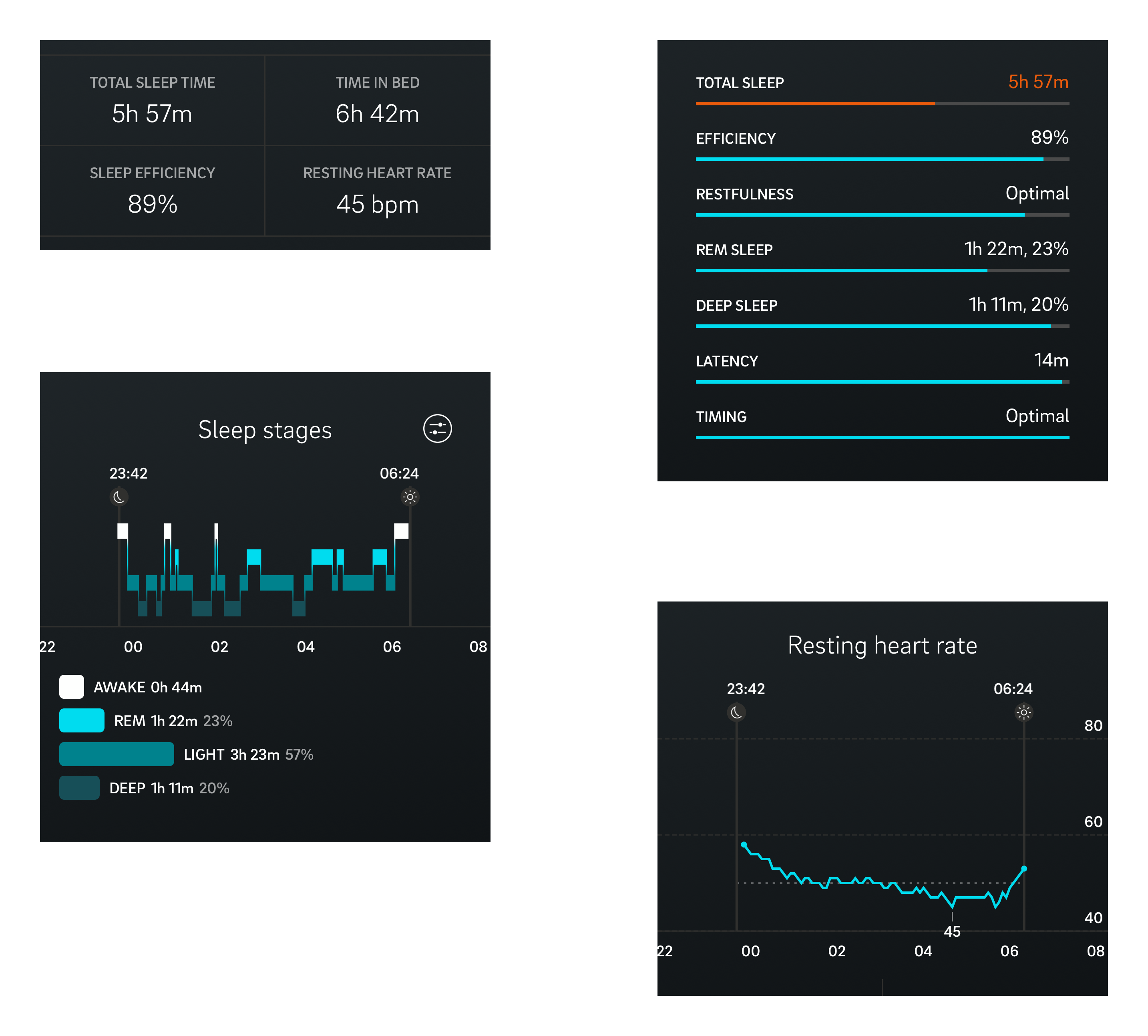 I always, always, always wake up for about 10-15 minutes, 2 or 3 hours after going to sleep. I don’t ever remember this, and I had no idea it was happening, but the data is really consistent.

What use is this data though? Well, it’s interesting for sure but the ring is ultimately only worth buying if it causes me to do something about it.

Acting on the data

I think blackout blinds would help, the curtains I have in the bedroom let a reasonable amount of natural light through and that almost certainly causes me to wake up early. The problem with this is that I’m a firm believer that waking up gently with natural light is good for you. So given that, the best thing I can do is to force myself to go to bed earlier. If I’m in bed by 10pm instead of 11 or 12, I can certainly sleep more and it does work. I still don’t get 8 hours but it’s definitely closer to 7.

I’ve also noticed something else though. Since I naturally wake up early, I never set an alarm unless I have something really important first thing. But when I do set an alarm, I’m much more likely to sleep up until it goes off. Is my body subconsciously aware that I don’t have an alarm set and is therefore choosing to keep me in lighter sleep towards the end of the night, which then allows the light to wake me up? I need to experiment more with this.

I’ve also experimented with going back to sleep once I have woken up in the morning. I used to believe that once I was awake, that I was awake for the day but it’s not true. Since getting the ring I have definitely woken up, quickly checked how much sleep I got and then successfully gone back to sleep. It doesn’t always work, but I should do this more often. I should also stop charging my phone next to my bed as when I wake up and use the phone for more than 30 seconds, it’s game over.

What about the Apple Watch?

There’s one more thing I wanted to address. Instead of buying the ring, why didn’t I use one of the many sleep tracking apps for the watch?

I love my watch and wear it every day, so my first instinct was to use the that device, if possible. I tried wearing it all night for a while with various apps (AutoSleep, Sleep++, and Pillow). They all work well and the watch can track sleep just fine.

I think the reason it didn’t stick for me was that it takes a level of preparation and thought that the ring does not. The watch can easily make it through a whole day, I do usually charge it overnight, every night. So if I’m wearing it all night, I have a choice to make. Do I top up the charge before I go to bed, or in the morning before leaving the house? What if I have an early meeting or gym class? Then I have to do it the night before, but what if I forget? Do I stay up later to charge it? Of course not, but that admittedly very first world problem meant I didn’t track my sleep every night, and eventually it just fell out of being a habit. What I know is that now I have a device that I just don’t need to think at all about for sleep tracking, it’s better than doing it with the watch. Also, a device with zero user interface is unable to be distracting. The watch does more than that, am I thinking of getting hours towards my stand goal while I’m trying to sleep? Probably not, but the pure purpose of the ring is only to track sleep, so it’s better as a device to wear in bed. Is it expensive? Absolutely, but if price is not an issue then I’d say the benefits are there.

That’s it! Well done for getting this far, if you did.

Oh and in case its not obvious, I paid for the ring with my own money and this post is not sponsored in any way.