I’ve been quite seriously considering using iCloud Drive as my primary synced file storage when the new OS releases arrive this September. Like many people, Dropbox has lost me recently and I’m actively looking for a new provider of this critical (to me) functionality.

My experience over the last day or so with the current version of iCloud Drive really isn’t filling me with confidence though. Right now, I use iCloud for all the normal things like device backups, iCloud Photo Library, Notes, and other minor sync and storage features of various third party iOS apps. I don’t explicitly use it for file sync. iCloud Drive is switched on but my “Desktop & Documents Folders” are not synced with it and my working directory for everything outside of source code is my Dropbox folder directly. I also don’t have the “Optimise Mac Storage” option enabled on my Mac.

As a result of this minor usage of iCloud Drive, I’m still getting by with the iCloud 50Gb plan. My photo library is ~35Gb and I still have about 5Gb free after everything else is counted. It’s enough for now, just. At the rate I use it, it’ll probably last me for another year, or even more.

This all worked fine until yesterday when I got an error message in an app I was using on my Mac (I forget which) that iCloud was out of storage and I needed to upgrade. Sure enough, I opened up Finder and see “iCloud storage is full” confidently stated at the top of every folder being managed by iCloud. I also see an exclamation mark overlaid on the iCloud icon in the Finder sidebar.

But hold on, what’s at the bottom of that window? That number matches with the space I see available in the iCloud preferences that you see above. 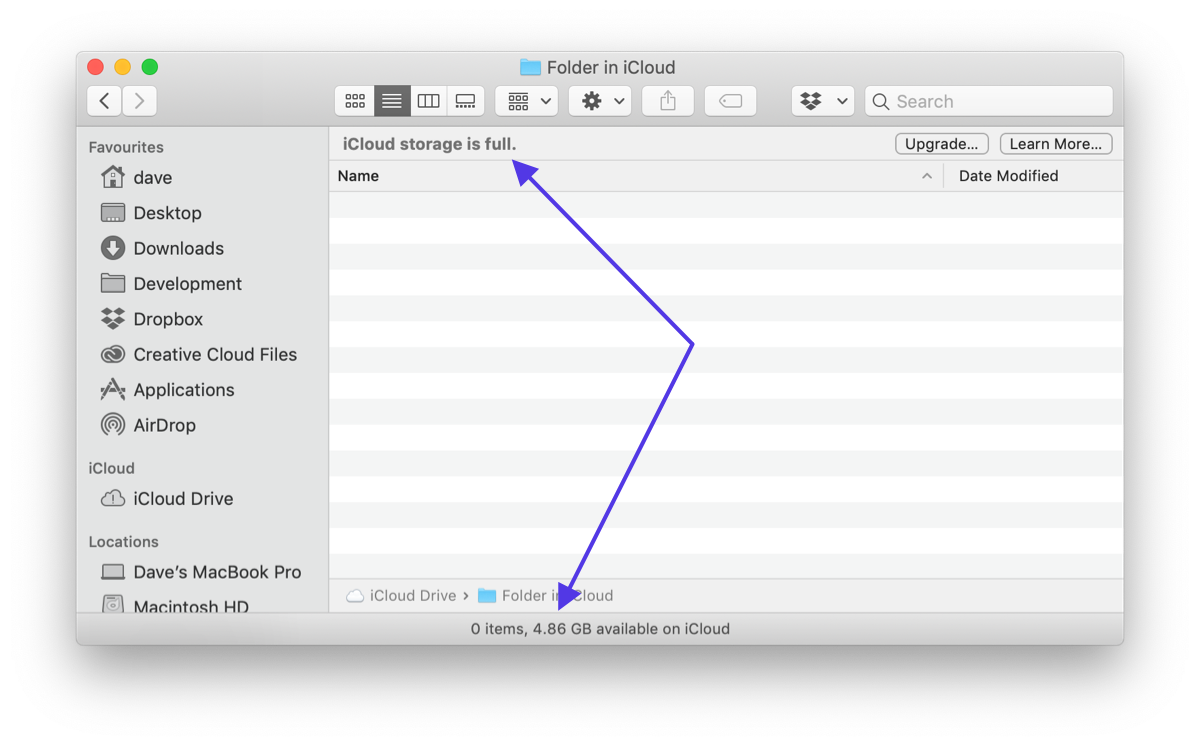 What’s even stranger is that right now, some things work and some don’t. This is my current situation:

I’d be much, much happier with the weird situation where one part of the system says it’s full, while another says there is 5Gb free if I was constantly being shown error messages. In that case, it’d just be a bug with the amount of space being shown in some places, I’d know I was really out of space and I’d upgrade.

No, it’s the silent failure and the fact that a file that seems to be synced with no errors, but actually isn’t that is so troubling. Unless something really major changes, I don’t think I’ll ever be able to trust iCloud Drive with my critical files.

This is a problem that Apple have had for a while, and I think it comes down to their desire not to bombard users with complex and cryptic error messages. That’s a good fundamental design principle, but I think they take it too far. It’s a good thing to tell your users when something is failing, especially if it could lead to potential data loss. I wish they weren’t quite so afraid of showing errors to users.

If anyone from Apple who’s on a team that might care about this is reading, my machine is currently in this state and I haven’t yet upgraded my iCloud storage. I haven’t filed a bug as that feels like a waste of time for this issue, but I’d be happy to help gather some troubleshooting information if it would be helpful. My Twitter DMs are open, if you want to get in touch.

Since writing this post, a couple of things have changed, but the bug is still very much alive and well.